Twelfth Night in Ripley was a wonderfully refreshing job to do. 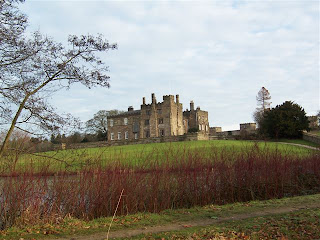 A great company of good people, and a lovely show that was well received. And in a glorious place. Being back in London is strange and unfamiliar, and has left me feeling more vulnerable than usual. I went to Planet Angel on friday for a night of clubbing and relaxing, had a great night and danced like a fool, and then came back to my flat with a few lovely people. I then decided to show them the pilot that Tim had just finished editing. Now this came up as the result of a chat in a bar about 2 years ago, and Tim and I ran with it and started to work with it. After about 6 months I began to worry that what I was making was not what I wanted to be making, in that the values celebrated in it and the intentions behind it were corrupting. It was becoming a venomous attack not only on ourselves but also on the career that we have chosen. And since I love my career, and most of the people I have worked with, I lost interest in the project. But Tim took the baton and carried on, with spectacular energy, and kicked us all into shape until he had enough footage to cut together a loose pilot. And for what he was trying to make, he did a great job. Now it is going to get sent out to people and seen by them, and I am a little worried. I have been happily rumbling along as a jobbing actor for a good few years now, and this pilot could contain the seeds of destruction for that career. I get my work by being good, and good to work with. This pilot makes me look like a vast uncontrollable talentless ego. The mistake I made was in choosing to personify all the aspects of myself that I hate. The character is too close to me, and not sharply enough characterised to be distinguishable. And it's not particulary funny. Now this could be a manifestation of my insecurity. After all I am putting out something that shows all that I consider to be wrong with me and my acting. And insecurity is nothing more than ego turned in upon itself anyhow. After all, we have to think we're important in order to think that people hate us. But one man said "this is going to make people hate you." And perhaps I'm too wrapped up with wanting to be loved? So many people in this profession have insecurities about themselves. Maybe this is why we want to put ourselves into other people's circumstances. All I know is that showing a pilot with a character based on the worst of me to just a couple of people makes me vanish into insecurity. Especially if I consider much of my work in it to be suspect. So how will I feel when this is sent round to all the people I might want to get auditions from?
Two weeks out of work and I am already in the hole. And that's all this is. I need money and a little pretence at job security and I'll be posting things to you telling you how fucking amazing I am.
Nathan has just requested that I write horrible things about him. Nothing springs to mind so I will instead tell you that he just made me look at his ass, while individually clenching each cheek, and announcing "See - getting tighter already." And that's true.
Posted by Al at 4:18 pm