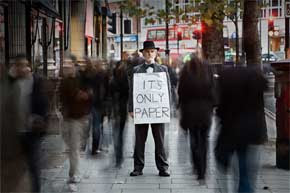 This is what I've been doing for the last few weeks - it's a depression era American play by William Saroyan. The things about this play that take me by surprise are the lack of cynicism and conflict. When I was at Guildhall a rather odd woman came and taught us a course on playwriting. The course was designed to help us to understand and respect the process a playwright goes through. The first thing she made us do was write an argument. The rest of the course revolved around making that argument the centre of a piece of theatre. So she began with conflict and prioritised it. Which is rife in playwriting these days. I have heard people dismiss plays out of hand because they have no conflict. Surely this is foolish? The best reason to dismiss a play out of hand is because it is crap. I suppose there is conflict in this play, in the sense of conflicting objectives and worldviews. What is not present is violence, malice, smallmindedness, ill-will - things that I come across in plays all the time and that are at the heart of most of the plays I have seen recently. I think perhaps people are mistaking conflict for violence, and who can blame them with the preponderance of violent writing and entertainment in our culture - reality shows which focus on screaming and shouting, which are informed by soaps of the same ilk. People watch the soaps, absorb them, and then when their lives are being recorded they alter their behaviour to reflect what they consider to be normal. The theatre is an entertainment medium, but it should not be trying to fill the same slot as television. It's a night out and a night out should be rewarding and fulfilling, rather than just reaffirming a sense of bleakness. And now we appear to be about to enter another worldwide depression. It's time to start trying to cheer people up without being schmaltzy and artifical - an optimistic message, well delivered is all that is needed. Dammit!
William Saroyan is not very well known in this country. He won a Pulitzer for "The Time of Your Life", which is the only play of his that is regularly performed in the UK. This is because it has a cast of 24 and won a Pulitzer - perfect for Drama School shows and thus in the mental furniture of lots of theatre professionals over here. He dashed out The Beautiful People for a bunch of friends of his over a period of 2 weeks, and you get the sense that he workshopped it with his actors and added and took away throughout the rehearsal period. His stage directions are almost Shavian in their specificity, and we found ourselves picking and choosing which ones were useful and which ones were artistic fascism. Our company is brilliant, and have humbled Mel (the director) and I with their commitment and positivity. It's so hard that they cannot be paid - the only way we're even going to be able to give them something towards their travel expenses is if we pack the houses every night for the rest of the run. We nominally had a producer who came to the first meeting and promised the earth, but then had a series of disasters so constant and so relentless and badly timed that it was almost as if she was making them up because she was too lazy to do anything. Floods, illnesses, deaths in the family, more illnesses, domestic disasters... One time she phoned me up with her sick voice and I found myself thinking that no matter how sick I am I never phone with my sick voice. It's hard to tell if she is honest or not, but I will never work with her again for sure. In 3 weeks she never met the designer, watched a rehearsal, or, I suspect, read the play. On the day of the first performance her name was taken out of the programme. She rang me in the morning and told me she had managed to secure an anonymous donation of £50. Thank god for that, I thought, and put her name back in. I won't name her in this blog unless she finds some reason why that £50 cannot be paid. I think I can guess who the donor is... And here am I being cynical. Dear me.
So what am I doing in this play? Assistant Directing. I'm not in it. I always say that I like directors that know what it means to be an actor even if they are shit at it. I wanted to see what it was like on the other side of the table and it has been very insightful. I will be a lot less worried in auditions now - we had to turn down so many lovely and talented people and it was very rare indeed for us to dismiss someone because they were crap or insane. And it's good to have confirmation that actors that offer things in rehearsal are loved - having to tell someone not to do something is so much better than having to find a way to get an actor to ... just ... do .... something!
But these actors do. And it is joyful. So come if you read this before the run ends - come and pay for the travelcards of these wonderful talented actors who have given pots of their time to do something out of love. Cheer yourself up, it's only an hour and a bit, so you'll be out by nine. On Sunday evenings the pub downstairs is open after the show. Here's a link to the What's on Stage review, which was good and gave 4 stars: http://www.whatsonstage.com/blogs/offwestend/?p=550
It runs Sunday and Mondays only for the next 2 weeks. 12th, 13th, 19th and 20th October at 7.30pm at the Finborough. Latecomers can't be admitted. http://www.finboroughtheatre.co.uk/ is the website and you can book there. Hurrah!
Posted by Al at 4:49 pm