Vancouver would be a much better town if it wasn't so horrendously expensive. The taxi from the airport cost me more than all the taxis I'd taken in Peru. I arrived in Yaletown where my best mate Dan's wife Minky works, and had a few huge lagers while waiting for her to finish work. I was peckish, and was unable to find anything on any menu anywhere that wasn't gargantuan, so I had to make do with liquid lunch.
From a tourist point of view my favorite part of Vancouver was the Museum of Antropology. This is located on the biggest university campus I have ever seen, and is a testament to how much space there is in Canada. It is a vast glass and metal structure crammed with totem poles from the restrained Musqueans, the figurative Haida and the completely over the top Kwakwakawak. I like them the best, partly because of the silly name and partly because of the brilliant dramatic sculptures. All the sculptures tell amazing stories passed down in the oral tradition, but only people who are born into the right tribe are allowed to know the stories, so all Joe Tourist can do is wonder why that bear is holding that bloke and what might happen next. (The picture is of a modern work in the Haida tradition called The Raven and The First Men.) There is plenty of information about how the British tried to wipe out the oral tradition and homogenise the aboriginal cultures by preventing them from holding Potlatches, which were clearly very important ceremonies to celebrate marriage, victories, and anything else. It made me feel quite guilty. Ironically the whole of Vancouver is involved in a more insidious homogenising project from the USA. There is a street where two Starbucks are opposite each other, with another just down the road. Worse than London. 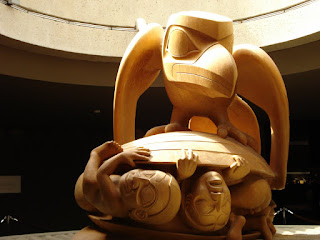 From a personal point of view it was good to see my friends and come back to western culture. At least I got the culture shock out of the way before the jet lag kicked in. The last day was spent on the beach in the blazing sunshine, sneakily drinking beer from the cooler, as it's banned in public, and swimming in the sea. The perfect end to a crazy holiday.
Oh and we went to the auquarium and they had whales! Beluga whales, with an underwater viewing area so you could see their blubber wibbling. I worried myself a little about how they go about catching the whales, as for the most part their ages are approximates which means that they were caught. It is good to instil a respect for nature in people, but at what cost? What percentage of the whales die in the attempt to get them to the aquarium? Here's a piccie of one anyway. 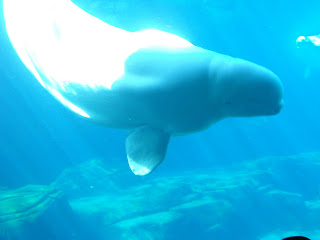 I have interpret a scarcely any of the articles on your website now, and I definitely like your line of blogging. I added it to my favorites entanglement page muster and will be checking assist soon. Divert report register in view my site as ok and leave to me conscious what you think. Thanks.