Donegal in the Irish Mist

I had a brilliant weekend with Harriet in Donegal. We went up THE HIGHEST CLIFFS IN EUROPE, and couldn't see a bloody thing because of the deep deep fog and howling wind and spitting rain. In August. So we stood right on the edge and leant over trying to see the sea and seeing instead a wall of white wind rushing up the vertical face. We stood far closer than anyone would feel comfortable to stand, because it looked like there was just a big white pillow below us. Now I realise that bungee jumping is probably more freaky than skydiving, because you can see the ground and it looks close enough to hurt lots. After a while we gave up on the cliffs because the fog was never going to lift, so we moved on a to a little village which has a pilgrimage route of ancient celtic crosses. The fog promptly lifted, of course. The village was hilarious. Glencolmcille it was called, I believe, and we were following a pilgrimage route around many ancient stone "stations" and a well. We followed the sign in the village to the well, and eventually ran into a large gaelic shepherd, who slipped from gaelic to english with fluidity and ease. Gaelic was for his friends and his dog. We explained we were lost. He explained that he had moved the sign to point in the wrong direction because he was fed up of Americans coming through his land in their cars. He then pointed us up the hill to the well, which is surrounded by a vast pile of stones - all the pilgrims bring three stones. The well itself had an altar where things of value had been left, clearly as prayer offerings. I said a few prayers, and then rummaged around in my wallet for something appropriate to leave. AH HA! My discount card for The Hen and Chickens theatre in Islington. Perfect! It still has some negligible value, and it's about my career which needs a turn up. So I popped it there, and there will it lie until it decays or someone nicks it. 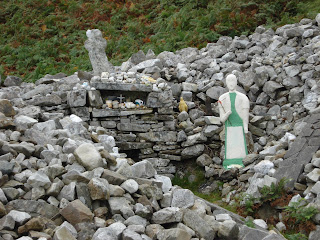 Then we had a big fat tasty meal in a twee but comfortable hotel in the village of Portnoo - http://www.lakehousehotel.ie/ Good food, and yet probably quite expensive for the area. The next morning it was frolicking on the beach and wading through a vast pile of hermit crabs to a small island, where I found a big snail shell. Brilliant!! I chucked it in the water, so one lucky hermit crab can find it and be the Uber-hermit crab. Harriet did loads of gymnastics on the beach and it was fun.

On the way home we stopped in an ancient stone circle built for the feast of Beltane. If it had been in England it would have been full of people, but no. It was in the middle of a working field with nothing but a plaque and a whole hell of a lot of pagan sheep shitting on the ancient earth-grass in the middle. But there was a lovely view. 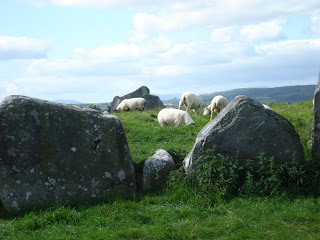 By the time we got back to Belfast we were both feeling relaxed as if we had had a proper holiday. And I got to fly business class back! All said a brilliant holiday courtesy of Harriet who sorted the flight out on her work and did all of the driving and was superb company for a couple of days exploring Ireland! 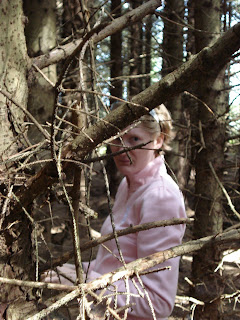