I just got back from Norfolk. The day after I returned from Peru I found an email from my agent suggesting I should have a look at a proposed audition for the part of Victor in Private Lives. I had been agitating to get seen for a part in Present Laughter at The National, so by comparison this was something of a disappointment. Added to which was the fact that the money wasn't great and I was emotionally completely fucked. Nonetheless it seemed like a good idea to go along to the audition, principally because the place they had chosen was right next door to my opticians so I could order some new contact lenses after my glasses made their suicide dive into the Amazon. So off I trotted, convinced myself I had totally muffed the audition, and thought no more about it. I even went so far as to tell the director - "Good luck with it all, then" as I was leaving. Typically, in true audition form, the ones you think you've buggered are the ones you get. So it was two weeks of rehearsal and then off to Norfolk for two shows at the disguistingly vast residence of - correct me if I'm wrong - David Rock-Savage, the Marquis of Cholmondely. I say it was his residence - actually it's his shooting lodge. Which is humungous. And full of deer, which come right up to the house. And stunningly beautiful. And full of amazing pictures and clocks and carpets and chairs. Oh god I want to marry him. 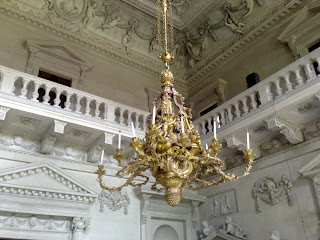 We were performing in The Stone Hall, which was carefully selected as the most echoey room in the whole building. And it was a bloody marvellous job. A great play in a great place with great people. We were given digs at a B and B run by the goddess of food, a sweet, loud and virtually completely deaf christian called Janey, who bellowed at us merrily all evening while cramming meat down our throats with a plunger. As the week went on the cast grew more and more hysterical, and I think our sanity was only saved by the sad fact that we were only there for a week. Nonetheless it was packed out every night, and even though Prince Charles didn't show at the last minute - (This is the second time I've missed him. I think he's avoiding me.) - we raised over a good ten grand for FARA. So next time I go out filming in Romania I expect to see some jolly grateful orphans what ho.
Being back in the smoke is strange. I miss the good local produce, the dogs and sometimes even the fact that everybody howls instead of speaking. Still I wouldn't mind moving out there some time. 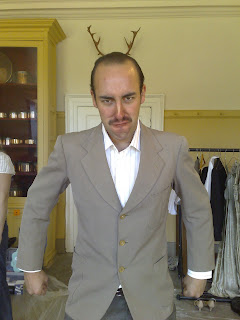