No I don't want a Taxi

I flew into Koh Samui. Not initially my intention but faster and my per diems covered the difference between train and air so worth it probably.

Koh Samui was meant to be a staging post. I reckon I'll manage to keep it that way, but I missed the last ferry to Koh Tau so have to stay the night here.

I am terrible at being approached by people. I just say "No" and move on if someone says hello to me. Instinctively. And then my pride goes up, so I don't go back and say "I changed my mind." I just strike out. So the plane lands in Samui and my bag is one of the first on the belt, so I grab it and am utterly bombarded with smiling crazy touts. They try every single note in every single octave, often in one word. I am saying "no" "no" "no" and slowly pushing through the smiling crowd firmly heading for the exit sign. With no idea where the hell I am going. Whatsoever.

Outside the airport I see a robot shop. I have never seen a robot shop before. I covet the robots. I want them to do things for me. So out comes the camera. Oops. Not only am I a HUGE GIANT, but now I am a HUGE GIANT with a backpack, a collared shirt, a day bag and a CAMERA! All of the tourist alarms in a mile radius go off simultaneously, and ordinary citizens who moments before were sitting on the grass doing each others hair are suddenly exploring their vocal range as thoroughly as possible while enunciating the word "TAXI". And before I know it there are 4 enthusiastic people with motorcycles surrounding me, and the only reason I am not intimidated is that they are all grinning like maniacs and singing "Taxi" to me. One of them is boss eyed. Another has an eye patch. I want to take a photo of them but I know the flash will attract more and I might get crushed in the press. So I make stubborn "I am walking" gestures, and strike out firmly in the wrong direction. Once I go round the corner I hide behind a tree and break out the crap map from my Lonely Planet. I realise I've been stubbornly walking into the middle of nowhere. I turn round and ten minutes later sheepishly run the gauntlet in the other direction. Thankfully they have given me up for lost by now.

Koh Samui is clearly very used to tourists, but as always this still means that the bulk of the prosperity goes right to the centre. I am shocked at the poverty as I walk from the airport to the town. I have no idea how far it is from one to the other. Every third car honks at me and slows down and shouts "Taxi". By now I WANT to walk. But I have no idea how far it will be. I keep on, past tied up buffalo, and millions of dogs. Millions of dogs, but no cats. (Later this evening I will comment on this in a bar to an Irishman. He will nod wisely, and announce "It's cos they eat them. They eat the cats." )

I have found a negative hand gesture that seems to discourage taxi drivers and instinctively flash it every time I hear a honk behind me. I find myself wondering if there is some sort of repellent.

Then I round a corner and see this. 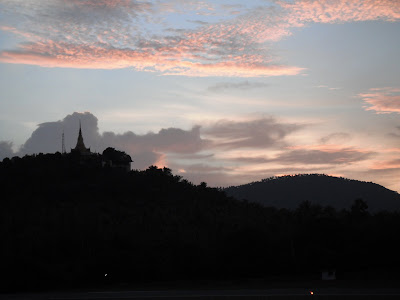 Now I know why I walked from the airport.

I keep walking as the sun sets around me. I am delighted by the colour in the sky and the breathtaking natural beauty that surrounds me at every turn. A woman with a toddler emerges from one of the shacks on my right and jumps on a motorbike. "Where you going?" she asks. "I don't know!" I reply. She points - "Go left at end, then go right at market - Chaweng!" "Thank you!" "You want lift?" I have a rucksack, a day bag, and am twice her size. She has a toddler behind her on her moped, and about half an inch of space. "No thank you! I like to walk!" "Ok bye!" Damn, the people here that don't want to sell you shit are awesome people. So now at least I know I'm on the right track. And suddenly I arrive in a metropolis. And still everyone is howling "Taxi" at me because I have a rucksack. And perhaps because I have been walking for a few hours and am sweating like a pig. I ask someone "Where is the beach?" and am pointed down a narrow alley. I chance it, and walk through dark empty streets full of dogs and chickens for ten minutes. Then suddenly there is white sand, and music, and a full moon hovering over a wide bay full of crystal water. And I realise how absolutely knackered I am. And I throw off my rucksack, and my drenched shirt, and leaving them behind me on the beach run to the water and throw some onto myself. A guy in a red shirt shouts "Beer?" at me. That's better than "Taxi." "YES!" I cry, loving the fact that I can reply positively. "YES! Give me beer!" And for less than a quid I am lying on the most perfect beach in the world under a full moon with an ice cold singha.

A few hours later and I have a room on the same stretch of beach and nobody lives here. It's silent. Because I walked into town, and all the taxis drop in the centre. So my accomodation is not only beautiful, but also cheaper than any of the central places, and pretty quiet. And it's only about 15 minutes walk from the centre of Samui which is tourist hell. But I'm off into it, as one thing I haven't done for ages is HAD A CONVERSATION with someone.
Posted by Al at 3:29 pm

I can't begin to tell you how big and warm the smile is on my face knowing I was in that very town four years prior to your arrival.

Koh Samui was the home of my awakening my friend. I hope you find it as wonderous a place as I did.

Spa Samui, on the beach, is amazing. Chaweng was the nearest place we could do anything fun...

If you stay longer or, if you pass through on your way back, spend a night in Bophut, the fisherman's village, it's not far from the airport... Coffee + Starfish... I'll say no more.

Sadly I think it's gone downhill in the 4 years since you've been here. I didn't explore fully though. And I am gonna stop in Bophut on the way back, as I got tipped already to go there by a really cool yoga teacher I met in the ferry over here.