Clarice, are the goats still drowning?

The Cave of the Nymphs. Not having a hire car, this was my destination today. Once the storm passed – and it was one hell of a storm – I headed out into the afternoon.

According to current local wisdom, The Cave of the Nymphs is the same cave that Odysseus and Athena used to conceal all of the treasure given to him by Alcinous and the Phaecians.

Walking round the harbour wall on my way out of town, I was struck by how clear the water was. I stopped to photograph a starfish, and saw something floating near it. “Whoa – it’s some sort of hairy jellyfish!!” was my initial thought. Nope. Freshly drowned goat. Must’ve bolted in there startled by the storm and not been able to get out. Poor thing.

And up the hill I go, guided or occasionally misguided by the eccentric local signposts. I ask the locals for directions – “Why the fuck you want to go up there? It’s closed.”

The Cave of the Nymphs is three kilometres up the hill from the harbour. Now, let’s think practically about this. Odysseus was given a trunk of gold by Arete. And then every single Phaecian nobleman present when he told the tale of his journey home gave him a tripod and a bronze cauldron. So that’s anything in the region of 40 to 100 cauldrons, and a big wooden trunk full of gold. I know he was a hero. I know he was buff. But a trunk of gold and 40 to 100 cauldrons up 3 kilometres of steep hillside? I ain’t buying it. If that cave was open back in the day, it would have been a place of worship, no doubt. But it ain’t the one in the book. The problem is that this region is sitting smack bang on top of a humungous fault line. In 373 BC Helike sank into the water forever. More famous because it was on the tellybox, Pavlopetri sank about 1000 BC. And in Ithaca, on the north east coast, Polis Bay is the hole left where the Byzantine city of Ierosalem sank there in 967 AD. There was a 7.2 quake in 1953 that flattened every building on Ithaca. They don't build high here, for a reason. The earth and the caves in it are going to move around, close, open, collapse and reform all the time here - this area is constantly being moulded by tectonics.

The cave itself has a very narrow opening. 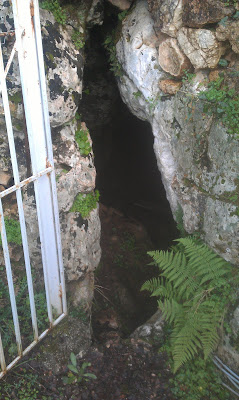 Although there are iron gates, nobody has bothered to lock them, and the last time there has been any successful tourism here is at least 3 years ago, probably more. All of the toll booths and signs are in disrepair and the fuses to the lights are all blown. The cave itself is pitch black, but my phone’s flashlight app got me as far as a rusted and useless old cable lift that would have ferried people into the depths. 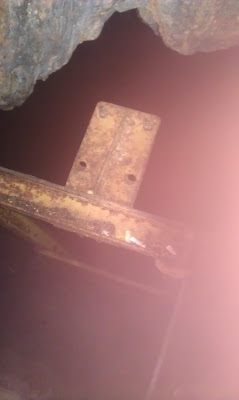 To the side of the lift is a rope, loosely strung on iron spikes down the precipitous slope, but only for a while. I went down as far as the rope would allow me, but the rocks were slick with rainwater that was still flowing, and without a rope I could have lost my footing and slid down. Nobody comes up there, so I didn’t fancy the idea of breaking my leg and having to claw myself back up the wet rocks in pain. So I stopped where I was and switched off the light. Profound darkness. As I sat in the darkness I suddenly got shot through with the understanding that I had not brought a sacrifice. If you go to a Cave of the Nymphs, you should bring a sacrifice. No food on me, so I rather clumsily said out loud “Er – there’s this dead goat in the harbour… It’s still fresh.” And then decided it was best not to stick around.

Now I am desperately tempted. It’s probably a good thing I don’t have a van, a load of tarpaulin and an accomplice, or that goat would be coming with me down to a deserted beach somewhere, and I’d be building a pyre and burning it. Not because I believe that it would achieve something, before any Christian friends of mine start getting concerned. Just because it seems like the right thing to do.

I won’t do it though. For something like that there really need to be two people egging each other on. Probably a good thing I’m on my own.

I am linking this very long and difficult essay by Porphyry, not because I even half understand it and recommend it but because I found it while searching for frivolous links to accompany this blog, and on a brief perusal, decided that I needed a bit of time and all of my English degree mojo to make sense of the bastard. But on a swift castover, there's something interesting there. And it's Porphyry so it's interesting to get an ancient Greek philosopher on an even more ancient Greek text...