Nico the car rental guy finally rents me a yellow Fiat Panda, so I can get out to the more isolated parts of the island.

“It must be very different with tourists here,” I say, by way of making conversation. “Nah man, fuck that we need the tourists. We need the tourism.” He responds. “Now don’t you crash. And don’t drink drive. Stick to the roads, ok? And don’t park isolated or some fucker will break the window. Pay me in cash. Don’t you dare crash.”

He fails to mention that I should remember to drive on the right as well. One narrow escape later, I am at the site of Odysseus’ Palace. There’s a dilapidated booth, that maybe in season charges a couple of euro and gives you a map of the earthworks. But since the excitement of the discovery it has proved to be way way post Odysseus. In fact, they’ve stopped bothering to tourist it up in any way, slung in a load of corrugated iron, and filled it with goats. The whole palace stinks of goat. And there’s a donkey. I call it Eurymachus. It doesn’t throw anything at me, but I keep out of reach of its legs. 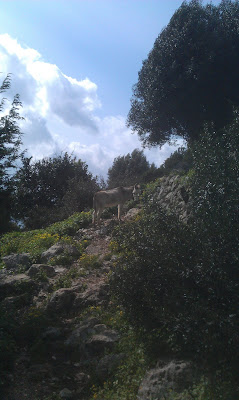 In the afternoon I drive up the mountain to the little path that leads down to Arethusa. It’s a spring, allegedly the one Eumaeus took his swine to drink from. It’s a long way down. Halfway, I stash my laptop in a bush. Too much to carry back up this slope. I’m not worried, there’s nobody for miles. At the bottom, the water trickles from the rock and then spreads and mostly pools back into a reservoir behind the fountain. It’s clear and tastes fine, which is just as well as I didn’t bring a bottle. Down there, with the sound of the spring behind me and the sea in front of me, I feel more isolated than I ever have done. Unfortunately there's recently been a massive rockslide right by the fountain, so there is nowhere to sit but on the rockslide itself.

I sit on the rocks, eat an orange and think about this island, and what I am getting from it. The people are great, the vistas beyond description, the climate unpredictable at this time of year, but pleasant. I bet it's great in summer. Nico says they need tourism. Do they? If everything mechanical were to stop working tomorrow, while corpses build up in the streets of London, the life here would stay more or less the same. They have fruit in abundance, wool, wine, water, fish, salt, meat, eggs, bread. And they've got a pretty well established tradition of storytelling for the long winter nights.This was an important place in the ancient world. Defensible and totally self sufficient. Tourism will bring more money for electricity, petrol and luxury. But not much else besides dependence.

Still, if you’re after a peaceful holiday in a beautiful place you can’t do much better than Ithaca. Although that’s a pretty inefficient recommendation really: "Everyone! Come to Ithaca! There’s no one here!” But you know what I mean.