After going on about the climate yesterday, the fates have clearly decided to throw me a curveball. The clouds descended this morning and stayed down all day. Miserable cold windy rainy wet day. But I’ve got a hire car and I’m not afraid to use it. Well, maybe a little bit. This morning I headed up to Exoggi – roughly translated that means The end of the earth. It’s an isolated little town right at the top of Mount Neriton, which is the highest peak on this island.

The road up was wet and visibility was down to about 3 foot in front of the car, which would have been okay if parts of the road hadn’t fallen off the cliff. Well, and if there weren’t rocks the size of cowheads sitting plum in the middle of the road saying “Hiya!”. And goat-shit generators wandering around in the middle of the road wondering what the hell this idiot is doing in a car, and whether or not they can eat you. But I’m still alive. Exoggi itself is a shell at this time of year. Today it was inside a cloud, all the shutters were closed, many of the houses seemed full of birds, others probably full of goats. I did see one human being. But just one – an old man, walking away from me up the road and into the fog, holding a stick, followed by a white cat. 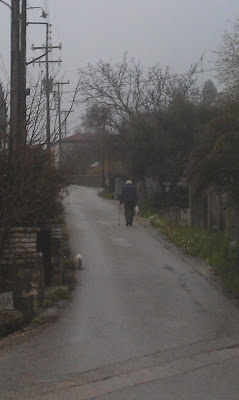 Above the town are the ruins of an older town, shrouded in mist. I wandered up there. Not much to see. The sad remains of old stepped cultivated gardens, now covered in rocks. Many of the walls seem freshly sprayed with hammer and sickles.

It is really striking how prevalent the KKE (The Communist Party) is at the moment in Ithaca. They have a respectable looking office on the main street, with a hammer and sickle over the door. 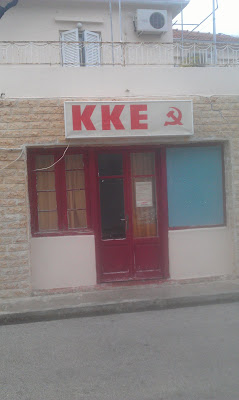 I find it odd to see a hammer and sickle again – I haven’t seen one since my childhood. Everywhere is graffiti in support of them. I suppose in a financial crisis that’s blamed on the excesses of capitalism, the obvious backlash is into communism. Especially in a community where the guy that spends his day fishing can’t grow oranges and the guy that grows the oranges can’t catch fish.

Above Exoggi, right at the top, is the Monastery of the Katharon – allegedly built by heretic Cathars, it stands at the top of the island on the original site of a Temple of Athena. I drove up there, expecting to have to climb over a fence as usual. But for the first time, there is someone there. The local Orthodox Priest, in full robes and fuller beard, is up there with a broom and a dustpan and mop, keeping the place clean. He smiles and lets me in. He's cleaning up goatshit. On the main gate there is a sign in 4 languages – “Please keep this gate closed at all times.” It is the only sign in more than one language anywhere on the island. This man is evidently on a one man crusade against the goats. I wish him luck. He’s outnumbered.

Having been to so many places of worship for the old religion for my research, it amuses me to see the priest here having a goat problem. Many contend that the origin of the idea of Satan as a horned God comes from the idea of Pan and the other horned gods, and the need to demonise them in order to prefer the Christian God. And in this place where goat heads pop out of every bush, and there's such tremendous solitude and natural power, it is easy to believe that one of those heads might be Pan. So here on the site of a Temple of Athena, it makes sense that the clergy are at war with goats.

Any trace of Athena has been purged from this site by centuries of devotion, and it’s gorgeous. Man made beauty is often at its richest when made for a deity or collection of them. I light 2 candles to speed my uncle and mother through purgatory. They were catholics. It feels quite special to see theirs as the only two burning here on top of this little world, and in such a shiny and devoted place. I wonder what the place it was built on top of would have been like. 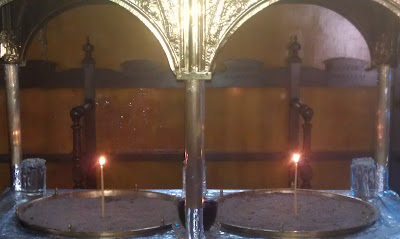 **edit - For all you geeks out there, I wanted to put in this passage from Plutarch. Paxos is near Ithaca, and I find it an extraordinary and moving piece of history or metaphor. The essay is titled "Why the Oracles are Silent". Pan is dead /Pan(theism) is dead? It's not the sort of thing Plutarch tended to report which is part of why it's interesting. The date is anytime between 14 and 37 AD - it was the reign of Tiberius Caesar, which has been found to roughly correspond with the emergence of John the Baptist and what followed in Judea. An odd, sad and inevitable tale though, and I find it fascinating. He has been talking about Gods;
"As for death among such beings, I have heard the words of a man who was not a fool nor an impostor. BThe father of Aemilianus the orator, to whom some of you have listened, was Epitherses, who lived in our town and was my teacher in grammar. He said that once upon a time in making a voyage to Italy he embarked on a ship carrying freight and many passengers. It was already evening when, near the Echinades Islands, the wind dropped, and the ship drifted near Paxi. Almost everybody was awake, and a good many had not finished their after-dinner wine. Suddenly from the island of Paxi was heard the voice of someone loudly calling Thamus, so that all were amazed. Thamus was an Egyptian pilot, Cnot known by name even to many on board. Twice he was called and made no reply, but the third time he answered; and the caller, raising his voice, said, 'When you come opposite to Palodes,a announce that Great Pan is dead.' On hearing this, all, said Epitherses, were astounded and reasoned among themselves whether it were better to carry out the order or to refuse to meddle and let the matter go. Under the circumstances Thamus made up his mind that if there should be a breeze, he would sail past and keep quiet, but with no wind and a smooth sea p403about the place he would announce what he had heard. DSo, when he came opposite Palodes, and there was neither wind nor wave, Thamus from the stern, looking toward the land, said the words as he had heard them: 'Great Pan is dead.' Even before he had finished there was a great cry of lamentation, not of one person, but of many, mingled with exclamations of amazement. As many persons were on the vessel, the story was soon spread abroad in Rome, and Thamus was sent for by Tiberius Caesar. Tiberius became so convinced of the truth of the story that he caused an inquiry and investigation to be made about Pan; and the scholars, who were numerous at his court, conjectured that Ehe was the son born of Hermes and Penelopê."69
Posted by Al at 4:31 pm