Walking, and how it makes you want to eat legs.

I can see why Odysseus longed to get back here. Coming at this time of year, in many ways I have been spoilt. I am currently sitting on this white stone beach 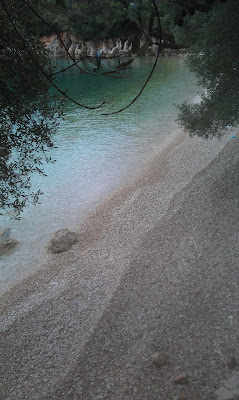 looking out at Arkoudi and mainland Greece.

There’s not a soul to be seen. Behind me on the hill I can hear the bells of goats, and always the birdsong. The calm of this place is beyond description. The whole island seems calm and slow, although everywhere I can see the signs of a tourist machine waiting to click into gear. Signs in English on locked and bolted doors. Advertising pinned to trees with maps to deserted tavernas plastered with slightly wrong Latin alphabet – “Spaghetti Boognese!” “Sandwitch!” “Ramp Stake!” "Lamp Shop!"

I couldn’t hire a car this morning. He’s only insured one of them. He tells me:

“You know how it is? It’s fucked. This whole country is fucked. Nobody came here for Christmas. I lost money on the insurance. So now I only insure one car until the tourist season.”

He’s lent it to a mate of his to take to Kefalonia for the day. He swore consistently in English for about 2 minutes – “Shit shit shit fuck shit fuck fuck shit shit” - went silent for a long minute while he seriously considered letting me have one uninsured, thought better of it and told me to come back tomorrow. I caught a ride into Stavros with a fisherman who sells sardines off the back of his van. He spanked it round precipitous mountain roads as fast as his little van could go. I was calm, knowing he does it every day, and making a mental note of how people drive here for my rental period starting tomorrow.

Down the hill from Stavros is a beach, and next to it is The Cave of Loizos – a much stronger contender for the cave in book 13 of The Odyssey than the one in Vathi. It’ll do for the one in my imagination now. It was a Mycenean “cult” sanctuary for years, and the remains of many votive offerings were dug out of it by Sylvia Benton in the 1930’s. She contended- according to the sign at the cave - that it was the most ancient site of “cult” worship, more so than even Olympus. I am suspicious of this. I also dislike an ancient and massive religion being referred to as a “cult”. But I can’t think what name it had – if any. Maybe it didn’t NEED a name – it just WAS. It does have two entrances – one for mortals and one for The Gods which keys in nicely with book 13. Unfortunately, the interior has completely collapsed now – another victim of the constantly shifting earth round here.

Then I caught the bus to Kioni, which is where I found the beach. I was surprised to see the bus – it came into Stavros just as I was getting to the top of the hill from the cave, and I managed to sprint to it. It was full of schoolchildren, who cheered when I made it through the door – they must have seen me lamming it up the hill. In fact it’s the school bus. It only runs twice a day. When I asked the driver “Do you go back the other way?” He gave me a massive cheese-eating grin: “Yes! Of course! Tomorrow morning, 7.10.”

Some hours later as dusk was falling I hit the road back, and am really pleased that not a single car passed me between Kioni and Frikes as I saw some of the most gobsmackingly beautiful vistas in the sunset while slogging up hills in my coat. 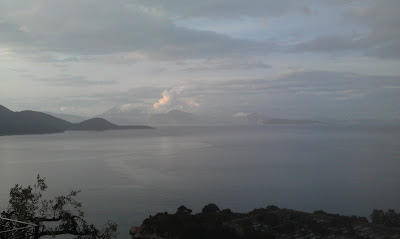 From Frikes I managed to hitch as far as Stavros. Only 7km to Vathi, but I’ll walk that after supper, or hitch, as I have found a place that does locally caught grilled octopus. Yes they’re as clever as dogs… But it’s just too damn tempting.