Hope that the road is a long one

Loose scribblings from diary on the way to Ithaca. Not got there yet though. Mostly for friends and family.

Easyjet have lived up to their name. The whole process of getting on this flight has been flawlessly simple and friendly. In fact, everything has swept me Ithacawards with remarkable goodwill. When the world smiles at you sometimes it’s hard to tell who started it. It might be me, it might be them. Everyone so far today – the guard at the station, the woman at check in, the Travelex clerk – has made a genuine and unforced connection with me.

I am not good at getting up early in the mornings. My dreams are too lucid and too entertaining and it always feels like a disservice to interrupt them. This morning I popped up from a deep sleep five minutes before my 6.00 alarm was scheduled to frustrate me awake with that jaunty and hideous HTC jingle. And I felt fine, on 4 hours. Just as well considering the flight leaves at 9 and I had not yet packed my bags after a last minute theatre trip last night.

Last night I consider to be the start of my journey to Ithaca, and the beginning of a strange and hopefully ongoing period of goodwill. After an immensely awakening week working with Louis Scheeder on Hamlet, connection, presence and simplicity on stage, I rushed off to Watford Palace Theatre to see the latest play by my wonderful cousin outlaw Charlotte Keatley. In the bar afterwards, which I shouldn’t have gone to considering the early start, I mentioned in passing that I was off to Ithaca. Charlotte lit up – she knows the island well. I now have a bucketful of recommendations – places to stay, places to see, and how to get there. She employs the method of getting around that always serves me well and that I would recommend to anyone that ever travels anywhere ever. Be present, be unafraid, trust strangers, talk to people. This way – usually – you have a wonderful time. And perhaps occasionally you end up locked in a cellar with no arms and legs, but it’s probably worth the risk. This call out to be present and immediate is totally ramified by the work we did on stage with Louis. I am now deeply excited to find out what the universe is going to bring to me this week. I’ll probably blog it relatively frequently as somehow it seems acceptable to do that sort of thing when away from home – and also I am on my own as usual so it’s a pleasant way to pass the time when – like now – one is crammed into an aeroplane seat and everyone around is fast asleep and gurgling.

Poring my way through the entertaining and erudite Cadogan Guide for The Greek Islands by Dana Facaros has helped me crystallise some of my intentions for this trip. It was all such an impulse and I was working so hard on Hamlet last week that I haven’t had the chance to ponder what the hell I think I am supposed to be doing. Ithaca is definitely the destination, but I if I am properly going to look for things that will inspire and generate material for The Odyssey, I might need to go to some of the other Ionian islands – principally the west coast of Corfu. Tenuous or not, Corfu lays a firm claim for being Skiathos the island of the Phaecians. And there are some beaches that people insist are where Odysseus washed up, as well as a disputed site for the Palace of Alcinous. Although part of me howls “It’s a MYTH! It’s a STORY! Stories aren’t REAL!” I think that places that can inspire stories are as important as the stories themselves. Does is matter if there really was a Palace of Alcinous or a beach where Odysseus washed up? Not to me. And there might have been. I am willing to accept any form of myth from any culture. Maybe one of them is true – monkeys and typewriters etc. And great fiction is often steeped in fact.

So stage one of the mission: get to Paleokastritsa by the end of the day. This may not be possible – Patras first, find out ferry times and durations, bend the plan if need be. Also I need to either buy a cheap digital camera or, better, get a charger for the one that I have. My HTC Desire HD phone on a stupidly long 24 month contract from Vodafone not only has a shattered screen but also a battery life of about 6 and a half minutes (6 hours), so there’s no point relying on that for a record. I seem to be using my blog as a to do list. Probably not the best idea, especially considering someone will bash me up and steal my laptop as soon as I arrive in Athens. But this might be the only time I’ll get to think for a good long while.

I should never wear a hat on a plane. That’s the third one I’ve left in as many planes. Shame – it’s been fished out of the thames three times now and still looks relatively normal. I shall have to get a new one to remind me of Greece. I’m on a bus. Everybody is asleep. Everyone was asleep on the plane, everyone is asleep on the bus. Do they know something I don’t? Or is it me?

Driving on a bus through Athens, having lost 2 hours to the time difference, which might make it harder to get off the mainland by dusk. Still worth trying. The city is ringed by empty barren hills, and looking up into them has got me reflecting on how this country is the cradle of one of the most important ancient civilisations, before the Romans came with their adopted Gods and militant expansionism and decadence.

The sun is shining mercilessly through the windows of the coach and I am ridiculously overdressed. The woman opposite me touched my knee and said “It’s much nicer than England.” She was right. Heading for Kifissos station for the coach to Patras – no idea how long it takes though. I’m looking forward to being able to stop and take stock, but I don’t want to until I’ve put some distance behind me.

Looks like Corfu might be a little harder to get to than I anticipated and a little more expensive – it of course has the disadvantage of being on the tourist route which is basically shit as it means all the buses from Athens have a 50% idiot tax on them. With that in mind I got a bus to Patras rather than where I was initially directed for Corfu which was still expensive but the guy at the booth was less of a dick so that clinched the deal for me. Thinking about this, Corfu is in a totally different part of the Ionian Islands from Ithaca and perhaps I should rationalise my plan and not be overly ambitious. It’s next to Albania for God’s sake. I’m still in an overcoat, sitting on the sunny side of another bus for the next 2 and a half without water. Being on a mission has its disadvantages.

Everyone around me is asleep again. I am not kidding. I started travelling at 7am, and since then I have been the walking centre of a little pocket of narcolepsy.

Made it to Patras just in for a spectacular red sunset over the sea. I walked to the end of the pier to watch a boat head off and then noticed how down at heel the whole area seems to be. It’s a ferry port, so they’re never the most salubrious destination, but I was struck by the prevalence of graffiti tags like “Patras will Rise Again.” Infuriatingly, the 20.30 ferry doesn’t run on a Saturday so I have to wait til tomorrow. In an internet café now, trying to work out ferry times for tomorrow and also find a couple of customer reviews for supercheap Patras hotels as there is an abundance of fleapits here and I can handle a walk anyway. The staff here are lovely. The internet here is broken. In fact, I can’t get online at all and nor can any of the other people around me. This whole town seems broken.

“Hi – sorry to bother you, is the internet working on your laptop at the moment?”

“Ah ok – maybe I’ll ask them to reboot the router.”

“Hi the internet is not working – would you be able to reboot the router?”

“Ahh – no no it is not the router. It is the internet. Sometimes it crashes 20 minutes. Then Boom! It is back.”

This is the view from my hotel room - Hotel El Greco.

Double bed, bathroom is across the corridor. Marble floors. 4 or 5 stories.

Saturday Night. I am the only occupant. 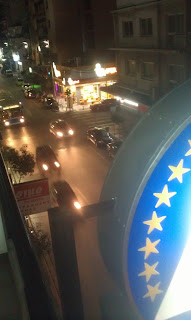 Found a hotel. Found some interet. Putting this nonsense out there and then heading in to see if everyone in Patras is still asleep or if someone can make me a cheap stifaki. Then early bed, early rise, explore the town and 12.30 ferry to Ithaki - should be there and ensconsed for late afternoon. Wooo!