On the train to Macchu Picchu I met a loathsome American woman who barked at me all the way about "This Fucking country! All this fucking walking! They´re so backwards they make you dump your toilet paper in the bins!" She was about 3 foot tall and shrivelled and spent the whole time we were talking trying to croak and laugh at the same time. The overall effect was like being washed with nails. When I mentioned to her that I had been perplexed by the water going down the plughole the wrong way she either roared with laughter or her pacemaker exploded loudly up her throat. She then turned her attention to the British Empire and how it was OVER and now it was time for the Chinese, and that America was OVER. We finally found some common ground over a hatred of Bush, and departed friends, although I´m sure she told the next person she met how I had tried to assault her or something.

Macchu Picchu itself was stunning although much easier to get to than I had hoped. I was expecting to have to hike for a couple of hours, but a bus dropped us off right outside the site. So of course it was overrun with tourists. On the way up I was struck by the number of gay pride flags there were - on the buildings, on the buses, on top of the mountains. The rainbow was everywhere. It was only when I mentioned this to my Nephew Lawrence that I realised I was a total idiot and that it was the Inca flag. But it´s identical, so very confusing. Our guide spoke faster than any man I have ever met and most of the time made no sense at all. He showed us many rocks, all of which he insisted were the most important rock in the whole site. Then after a brief but torrid romance with the words June the twenty first, which he must have said 15 times in the space of a minute, he left us in the queue for Wayna Picchu which is the large sharks fin mountain at the back of the site. My first bit of proper hiking. They only let 400 people up so Lawrence and Charlotte kindly waited behind while we confused the guard into allowing two more than he thought up there. Louis - (another nephew) - and his mates Augustus, Joss and James and I slogged up it in the blistering heat for some amazing views of the cloud forest and the Sun Gate and the site itself. The problem with altitude is that you get really out of breath quickly as the damn oxygen is just too heavy, so I was puffing and panting like anything and just glad that the guys I was with were as knackered as I was most of the time. Here`s me on the summit. 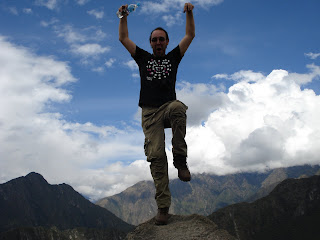 The odd thing is I never realised how recently the Incas were around - they only really started during The Wars of the Roses, and got wiped out while Shakespeare was writing. In that time they built some pretty impressive edifices and without using mortar - they just hewed massive boulders into just the right shape and stacked them. Amazing that they stood the test of time.
Posted by Al at 5:46 pm