Well I thought it would be better to just post on my blog and let people follow if they have any inclination. Also I can use this as a sort of diary, since otherwise the madness will be forgotten which will be a shame.

Anyhow, I woke up in the morning on the day I was meant to be going to Peru after staying up far too late with Nathan. Of course Addison Lee weren´t answering the phone as usual. They are clearly getting too popular for their own good. The people on the phone are sarcastic bastards half the time when (if) you do get through. So I hiked my stupidly fat rucksack onto my virgin shoulders and struggled off down the grey road towards Victoria station. Hiking practise, I thought. Never too late.

Five minutes later I was on a bus. Much better idea.

Then a budget airline to Toronto, which left half an hour late. This worried me as I had a connection to make. All worries were shortly afterwards rendered meaningless by the sad fact that the plane was filled with hyperactive teenage girls with carefully filed elbows. Bruised and deafened I emerged some hours later in Toronto. I was tired, but everything was made better by the love 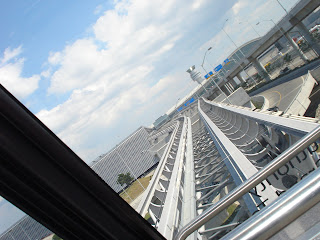 ly rollercoaster ride that they gave me for free in Toronto airport. I took a photo.
This corner is called "Crazy Tower Fork"
The Rollercoaster is free and runs regularly. One of the coolest things about it is that you get a countdown to the next one IN SECONDS. SECONDS I tell you. No leaves on the line here, eh? I asked one of the local women to take a photo of me on the coaster but she just hooted at me like an owl. So I made friends with a gay japanese guy living in New York, and together we found the place to check in, after much confusion over which side of the escalator we were supposed to stand on.
So having left London a couple of days after a major terrorist attack, and having had absolutely no trouble whatsoever getting through customs I then had to hang around for ages and ages while some jobsworth twat tried to stop me getting on the plane because a corner of my passport was slightly loose. But I made it with seconds to spare.
My companion on the second leg was a woman from the Las Casas family, who lives in Toronto now married to a Pole, but who was born in the mountains some distance from Lima. Her mother was dying and she was going to have to take a 22 hour busride up the mountains to sit by her bedside. My heart went out to her. She distracted herself and me by trying to work out which mystic number I represented. This mostly involved making rings around letters and numbers fairly randomly before nodding in a satisfied manner and telling me that I was mostly 3 but with a strong 5 and 7. And not enough 4. Which means that I´m chaotic and need to work on my work ethic. At this point I started to wonder if she´d been following me around, so I went to sleep and woke up shortly before we landed in Lima.
Lima caused me to panic by taking FOREVER to wheel out my bag. When it eventually came I was convinced that whoever was supposed to be meeting me had gone, and that I was going to get beaten up, mugged and sold into sex slavery in Columbia. Thankfully my nephew Lawrence was there to meet me complete with funky long hair and lovely girlfriend Charlotte. We bundled into a taxi. This was my first experience of Peruvian driving. Pretty good in retrospect. We only had two near misses and both were pedestrians. We were briefly held up by a car that had managed to flip onto its nose on a dual carriageway. But we made it to the gorgeous house of my sister in law´s parents late at night but with all my luggage intact. I got inside, drank about eight litres of water, crawled into bed and passed out. Long haul sucks. Cusco was beckoning with just a short flight - wooo.
Posted by Al at 8:47 pm

Dude - you can import your feed to your facebook...

Makes it nice and simple..