All the hammering and sawing was worth it. I got to the party and they had built a bloody great big scaff bandstand with netting and dancefloor and sofas and a whacking great big free bar and cheese and tables overflowing with meat and nary a vegetable in sight. So I started getting those free Pisco Sours down me. What a blimming marvellous night. After about half an hour of standing at the edge of the dancefloor thinking "I really don´t want to have to dance" I got grabbed by Mrs. Kelly who helped me come round to the opinion that I did. And looking at my camera it seems clear to me that that´s all I did for the rest of the night. Apart from drink a whole hell of a lot of alcohol. And eat approximately 3 and a half llamas, one of them raw in carpaccio form. I may have taken something hallucinogenic too, as I remember many many balloons fighting in the air, and one gigantic huge big LORD OF THE BALLOONS who towered over me and filled me with awe at his terrible beauty.
However it worked out the party was a stormer. Best band in Peru - (As in 15 piece orchestra and loads of excellent singers). Superb cooking of the llamas, although some cows slipped in somehow. Mercifully most of the vegetables were weeded out at the expense of letting in a chicken or two. But they´re everywhere here so it´s to be expected. In fact they grow them in the desert. When I was watching the sun go down in the middle of the desert there were X-Files style long white silos in the middle of nowhere. Practising my Spanish, I asked the guide "What the fuck are those??" "Cheekens" he responded. Yep. Cheekens. Farsands of ´em. Out in the desert. Growing. Waiting.
Anyhow. Leila or however she spells it proved a patient Salasasasa teacher and taught me a new move. So now I have 3.
This internet cafe has no photo download facility. Honestly. I come to use the internet in the middle of the Amazon rainforest and they don´t even have a thing to connect my camera up and download photos. So blog is gonna be dry until I get back from the forest I guess.
Coz I am in Iquitos. Land of the motortaxi. I have yet to buy a jungle tour as everyone is too keen that I buy theirs and I don´t trust any of them. Problem is I am English and these guys are used to Americans, so they are spending way to much time explaining how clean their jungle lodges are without realising that I want a bit of dirt. Not too much dirt of course, but I don´t want to go to America in the jungle. I want to pretend that I´m in the rough of the jungle, but without the pissfish and strychnine. I´ll even put up with the pissfish if it´s not my urethra. In fact, here´s a picture of a pissfish so all the boys can wince. It´s barbed and it swims up your wee and gets jammed. Ow. 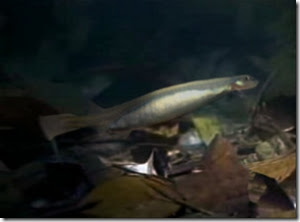 Anyway right now I´m using a good excuse to not book my Amazon tour. I´m telling them that I´m unable to pay until my new credit card arrives at my house tomorrow. Nothing they can do about that, and it would be a great way of ditching salesmen. I just wish it wasn´t true. I´m looking at the possibility of sleeping on a street filled with mototaxis. They had better let Nathan my flatmate sign for it, not least because he´s taking off work to get the fucker but also because I am properly up shit creek without it. But let´s take it one day at a time. If I get the tour you won´t hear much for a week as I´ll be up the Amazon. If I don´t get the tour you won´t hear much for over a week as someone would have run over me in a mototaxi and then reversed to steal my Tshirt, before feeding me to the crocodiles.
Oh and a mototaxi is a moped rickshaw thing. They´re everywhere here. No roads in. Where the hell do they all come from?
Posted by Al at 3:46 am