Back to Cuszco, and nobody knows where we`re going next. Lawrence is sick and Charlotte is tired and the teachers are still on strike so that rules out Arequipa. Ayacucha is 25 hours away by bus. After much wrangling Lawrence and Charlotte book a flight back to Lima, leaving Jack and I and Louis, Augustus Joss and James to work out where we can feasibly go. One trip to the bus station later and we`re all off to Ica, for the town of Huacachina. Happy I know where I`m going I head on up to Saksaywaman, the oh so hilariously named Inca fortress just outside Cuszco. It was raining a bit, but I took a few photos of rocks. They`re massive, and just stacked on top of each other. Clever lot the Incas, apart from that lack of writing thing. 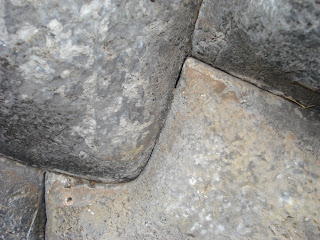 Then it`s a luxury overnight bus trip. Utterly terrifying. I was in front at the top and ended up having to close the window so I didn`t panic every time the driver overtook on a blind corner with a precipitous drop. But we arrived in Ica unscathed.
Ica is full of fat taxi drivers who pull your clothes. Jack and I got into one of their taxis with two guys we met on the bus and headed for Huacachina. The taxi driver kept trying to tell us he`d take us on a tour of the town of Ica, which is about as appealing as an offer of a glass full of shit. But we smiled and nodded and got the hell out of his cab at El Huacachinero - our hostel. LUXURY! Swimming pool, hammocks, beds with pillows, a shower that works, and the sand dune comes right to the bedroom door. The town itself is tiny - just a cluster of buildings clinging on in the middle of the desert, clustered round a stinky lagoon. 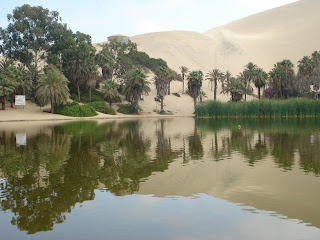 First things first we went out on dune buggies, where a Peruvian driver has access to a precision vehicle and a huge tract of desert. Brilliantly terrifying - I was glad that Health and Safety hasn`t made it as far as Peru, as it was highly dangerous and all the more fun for that. And punctuated with stops to strap on broken sandboards and limp down great big dunes standing on the things. After that it was time to do some lazing by the pool, with occasional breaks to walk up a dune and run down the other side. Or to eat food. Or to get up to date with this blog. YAY. 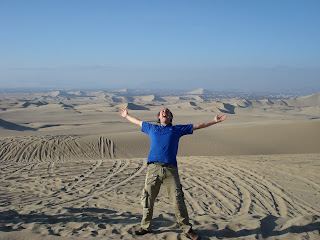