Finally the time for the trek had come. 43 people from many different nationalities, age groups, and walks of life gathered together and loaded onto buses to take us to the small town that would form the launching point of the journey to Choquequirao - the town of Cachora. This was an eye opener - certainly the poorest place I had yet seen in Peru, the majority of the houses are made from Adobe, which is basically mud mixed with straw. Not really built to last. Here´s a pit for mixing it up. 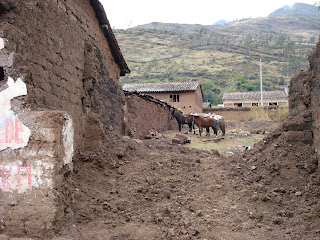 On the way in, I learned a thing or two about Peruvian politics. Rather than party political broadcasts or question time, it seems that elections are decided by who can spraypaint the nearest house with the biggest name. Some of the more enterprising candidates had helicoptered off to the nearest mountainside armed with gigantic lawnmowers and quite literally carved their slogans into the mountain. Brilliant. 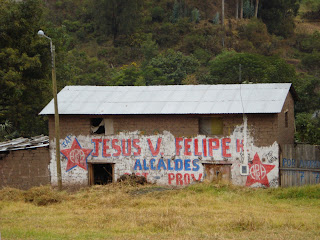 Also the Peruvians seem to know how to strike. Currently the teachers union is on strike. The powers that be are threatening the status quo by introducing exams for all the teachers. This is because the standard of education in Peru is incredibly low compared to all other South American countries. The problem is that the teachers don´t want to take exams that they know they are going to fail and their livelihood is threatened. So they are up in arms. But rather than waving banners and shouting slogans and being ignored by their supposedly democratic government despite marching in their millions, they set off rockslides. Yes - massive huge great big whacking rockslides. Huge big boulders all over the roads. Now I have already explained that people in Peru drive like lunatics. They have already killed a busload of people this way, and they have raised merry hell with the transport system. Even if the rocks get cleared they are put back into place by crowds of gleeful children who are glad to be away from school because their teachers are so awful. Thankfully we set off early enough in the coaches to Cachura to avoid the worst of it, although there were some trees felled on the road and a couple of times the driver had to get out and hump rocks, while having insults and sticks hurled at them by the local kids.
The whole of the town of Cachora had been mobilised when we arrived. There were about 40 mules and 30 Peruvians attached to them as well as 5 guides all milling around vaguely in shock at the humungous gringo windfall that had blown their way. I went for a little wander and found a small shop that sold coca leaves. Good for altitude sickness I am told. One of the guides spotted me and made me go back into the shop and buy some baking soda as well. Apparently they don`t have any effect unless you catalyse them with the soda so that was nearly a waste of 9 pence. Phew. 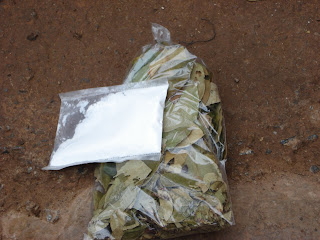 I swear that the white powder there is baking soda. The leaves themselves are all pretty brown and unappetising looking. I wasn´t sure I wanted to try chewing them but virtually everyone was getting some including my brother Rupert and he ought to know...
Posted by Al at 8:03 pm