Trekking on the Ritz

"Where the hell is my backpack?"
"It`s on one of the mules."
"oh"
So I packed light and got a good backpack so I wouldn`t die on the trek. And then they go and load it on a mule. God Damn it! I only have three T-shirts and a pair of shorts. Still nice to know I get to travel light.
Day one was pretty relaxing. 20k into the mountains and the only shit bit was that we set off so late that it was dark by the time the stragglers arrived in the campsite. This first campsite came as a surprise. It had a bar and a shower. I was beginning to get the impression that it might have a swimming pool somewhere. This, I really began to understand, was not going to be a Trek so much as a manicure on a mountainside. The Union Jack that was erected at the top of the first peak we reached - despite the fact that much of the party was Scottish or French - brought home to me the fact that this was going to be one of those quests for lost colonialism. Take that, I thought to the bitter old witch I had met on the train to Macchu Picchu. The British empire still at least thinks it rules the world. 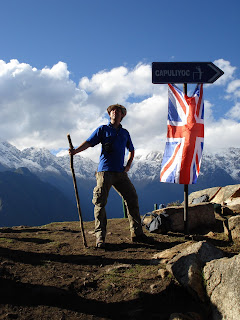 I stuffed about 27 coca leaves into my mouth with some baking soda and retched for 2 minutes before they stopped tasting utterly foul. Then I chewed them hard until they were a pulp and stuffed them into the corner of my cheek which went completely numb. "These things have no effect at all. What a waste of 9 pee," I thought as I sprinted down the mountainside to the river, leaping over obstacles and howling at the birds. Clearly it`s just a placebo, I said to myself as I overtook all the guides but one, who I collared, embraced and chewed his ear off about how beautiful the mountains were and how big the world is and how lucky we all are to be alive.
Day two was a little more trek like. I got down into a valley and crossed a pretty sturdy rope bridge, before starting a day long climb. Slog slog slog slog slog. Pant pant pant pant pant. Gorgeous but dusty. Halfway through I tried some more coca. Nope. Not much help. Mostly driven by the fact that it was stunning I got to the rest point and met some very engaging American lesbians who were travelling with another American girl and her Senegalise Italianate Rastafarian boyfriend. Of course they had guitars and bongos and a saxaphone of sorts, so Jack got out his guitar which had been providing endless entertainment and we all had a sing along. Their guitar was right handed. This was a good thing, as Jacks is left handed therefore nobody can play it but him. We had a good jam before we all were called for luch. Mealtimes on the trek were a hilarious affair, with everyone being forced to wash their hands before sitting at a really very long table and passing bowls up and down. Since almost everyone had been to or were still at boarding schools this was a very familiar ritual, and the food was surprisingly good considering it had to be made up of the lightest things possible, although bulked up with local produce - eggs from the condor proof hens, who have slippery red plastic on their backs, etc etc.
Most of us made it to the campsite on top of the mountain okay although a few ended up on mules. More jamming in the evening before realising that camping on the side of the mountain is stupid as you slip out of the bottom of the tent. I had put myself in an empty tent which was a relief as I was meant to have been sharing with Jack and Lawrence who slid down the hill, tore a hole with their feet in their tent and got eaten alive by spiders and flies. I just fell off my groundmat and froze to death.
Day three was just a hop , a skip and a jump to Choquequirao, which was stunning. Mostly buried still in cloudforest, and with some of the restoration work having been done with CONCRETE (I kid you not) the city is vast and still being uncovered. Some locals still come up and sacrifice things there - and as I discovered, the muleteers from our trek sacrificed a rooster from our campsite. Okay I cursed it when it woke me up, but that`s extreme. Either way, Choquequirao was a sight to be seen, and I fear it won`t be for long. Roads are being mooted and there were sickeningly awful blue arrows embedded in the floor to try and ferry people round it the right way. Alix de Cazotte and I got a little fed up of being herded like the mules and so we abandoned the group and pretty swiftly found a stunning view that we would otherwise have missed. 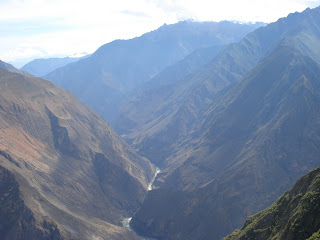 Then we found a little pathway up into the Cloud Forest and wandered far enough to satisfy our sense of rebellion before heading back down to join the group who had found the most absurd place yet to have lunch, right on the side of a hill. I thought it was a good time to have my first cup of tea, so I sipped tea on the mountainside and it was jolly nice. 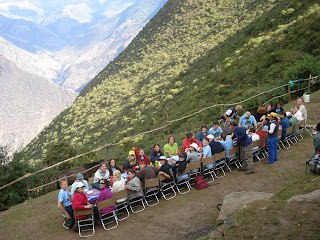 The rest of the trek, so as not to bore you too much, was the same as the first half but the other way round. But I was noticeably more able to breathe in the altitude which can only be a good thing. I arrived back in Cuszco feeling fit and healthy. Hurrah! And I made it back to Cachora in the first group which pleased me even if it was just coincidence as nobody was really that interested in racing. Such a huge trek and so many people, it would take me forever to go into explanations of all of them. There were French families and then there was the French family who were English and there were Australians who weren´t or were they and lots of Barclays and even some Mathers.

It was an amazing trek. We covered only 62 Kilometres but it was usually very steep and with the range of ages and experiences it was pretty impressive the way that nobody got hurt beyond one vicious spider bite to Hugo as a reward for taking a shortcut, and a stack of nasty blisters.
Posted by Al at 8:29 pm